Skip to content
Luzzatto was born in Padua, Italy. As a child he was recognized as a genius, and was well versed in both Jewish and secular learning. He was also a mystic with strong messianic tendencies. 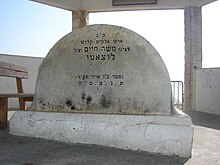 Luzzatto (1707-1746) was born in Padua, Italy. As a child he was recognized as a genius, and was well versed in both Jewish and secular learning, including classical languages, science, and Italian literature. He was also a mystic with strong messianic tendencies. He became a very controversial figure, and his works were appreciated more after his death than during his lifetime. In 1727 he began to hear a maggid, a divine voice, and recorded its teachings. When it became known, a great controversy erupted among the rabbis over the authenticity of the voice. Evidence of sorcery was found in his home, and he was compelled to hand over his writings and refrain from recording further revelations. The ensuing uproar forced him to leave Italy, and his works were burned or hidden.
Luzzatto moved to Israel in 1743 and died shortly afterwards. Perhaps it is symbolic that he is buried next to Rabbi Akiva. Akiva began to study at the age of forty, while Luzzatto died near his fortieth birthday. Both were mystics who acted to hasten the messianic age.
Luzzatto’s book ‘The Path of the Just (Mesilat Yesharim) is regarded today as one of the most important ethical works in Judaism. The book is based on a Talmudic verse describing the path to spiritual perfection and prophecy.
Rabbi Pinchas ben Yair said, Torah leads to watchfulness, watchfulness leads to zeal, zeal leads to cleanliness, cleanliness leads to separation, separation leads to humility, humility leads to fear of sin, fear of sin leads to holiness, holiness leads to the Holy Spirit, and the Holy Spirit leads to the revival of the dead. (Avoda Zara 20b)
Luzzatto describes in detail how to acquire these traits and ascend the ladder of holiness. He wrote in his introduction, ‘The foundation of saintliness and the root of perfection in the service of Gd lies in a man’s coming to see clearly and to recognize as truth the nature of his duty in the world and the end toward which he should direct his vision and aspiration in all of his labours all the days of his life.’