Skip to content
Kinneret was established in 1909 and became the agricultural school attended by the pioneers whose ideals shaped modern Israel. In the cemetery several nineteenth and early twentieth century pioneers and Zionist philosophers are buried.
Courtyard
Kinneret  soon became a first stop for many pioneer settlers at the turn of the twentieth century. They explored ways to build an ideal society. Several forms of communal agricultural settlements were established which were to lay the foundations for the Jewish state.
Kibbutz
The size of the group was limited by its emphasis on close relationships. Degania was the first kibbutz (kvutza) and was established in 1911 by 12 members.
Stressing self-reliance, the group had to be large enough offer productive employment in several different sectors providing a framework for expansion and essential services such as schools. The first large kibbutz was Ein Harod in 1921. The bylaws of both small and large kibbutz called for complete economic equality.
The Collective Moshav
This was a development of the kibbutz. Its members believed in collective ownership of the means of production, while preserving the traditional family unit (meals were eaten at the family table, and the children slept at home). For them economic equality among the members was not essential. The first moshav, Merhavia, was established in 1911.
In 1911, two years after the college was founded, the first agricultural school for women was established. The courtyard was part of its campus. Many idealistic women had left the ghetto and studies to work the land in Israel, only to discover that they lacked the necessary agricultural experience and physical stamina. The school, which taught women to grow vegetables, keep a cow shed and raise chickens, improved status of women in the new settlements.
Today a collection of photographs from the early days is on display. A sign in the courtyard marks the room where the decision was taken to create the Haganah, the Jewish underground military force, after it became apparent that the British were not able to defend Israel’s Jewish population.
The Cemetery
The cemetery’s entrance is to the right of the gate southeast of the junction, towards the lake. Ten metres west of the tall palm tree on the shore is the grave of the poet Rachel (1890-1931)
Rachel Bluwstein
Rachel immigrated from Russia in 1909 and was one of the first students at Kinneret’s agricultural school. She was a prolific and well-loved poet Much of her work has been set to music and is an integral part of Israeli  culture.
The following is from Anthology of Modem Hebrew Poetry. Institute for the translation of Hebrew Literature and Israel Universities Press, 1966. Translated from the Hebrew by A.C. Jacobs.
Perhaps
Perhaps it was never so.
Perhaps
I never woke early and went to the fields
To labor in the sweat of my brow Nor in the long blazing days
Of harvest
On top of the wagon laden with sheaves,
Made my voice ring with song Nor bathed myself clean in the calm
Blue water
Of my Kinneret. O, my Kinneret,
Were you there or did I only dream?

The Forty Zionists
Berl Katznelson and his wife, Moses Hess, Ber Borochov and Nachman Syrkin are buried near Rachel’s grave. 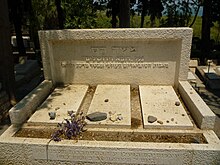 Moses Hess 1812-1875, was one of the intellectual founders of modem Zionism.  Born in Germany, as a young man he abandoned religion, married a gentile and became a socialist activist. After twenty years of estrangement he returned to Judaism, defeated by antisemitism. In Rome and Jerusalem he wrote. Because of the hatred that surrounds him on all sides, the German Jew is determined to cast off all signs of his Jewishness. No reform of the Jewish religion, however extreme, is radical enough for the educated German Jews.
But even an act of conversion cannot relieve the Jew of the enormous pressure of German antisemitism….the Jewish people will participate in the great historical movement of present day humanity only when it will have its own fatherland.
Hess believed that a Jewish state must be built on the foundations of acquisition of soil by the nation as a whole, creation of legal conditions under which labor can flourish, and establishment of Jewish agriculture, commerce and industry in accordance with the ethical principles of the prophets.
Nachmarr Syrkin (1867-1924) was bom into a religious family in Russia and, like Hess, abandoned religion for socialism. Turkey had outlawed Zionist activity and when in 1904 England offered the Zionist movement Uganda as a national home for the Jewish people, Syrkin headed the a Zionist splinter group advocating acceptance of the British offer. Syrkin contended that while the Jews had no land of their own, Jewish lives were everywhere in peril. The Jews needed immediate refuge, and a state in Uganda was better than no state in Palestine. A majority of the Zionist Congress, arguing that the goal of Zionism can only be a state in the Jewish homeland, turned down the British proposal.
Ber Borochov (1881-1917). Most secular Jewish intellectuals at the tum of the century affirmed that the cure for antisemitism (and the rest of the world’s problems) lay in the victory of communism over nationalism and religion. Consequently, they thought they had to choose between communism and Judaism. Borochov was the first to integrate “scientific socialism” and Jewish nationalist. He contended that because Diaspora Jews were denied the right to work as in Russia where Jews were excluded from many economic sectors, the Jews needed to reestablish a Jewish proletariat in the Jewish homeland in order to achieve freedom and equality.
Berl Kalzrelson (1887-1944), affirming the labor ideology fashionable among his Zionist contemporaries, learned the trade of blacksmith before coming to Israel. He wrote in 1908, ‘What I want is to go to the land of Israel, to  work and to light a litte spark.” He was active in establishing consumer cooperatives , the sick fund (Kupat Holim and Clalit Health Services), a newspaper, libraries, and a workers’ publishing house (Am Oved), The  Teachers Seminary nearby is one of many institutes in Israel dedicated to his memory.
South of the graves of Borochov and Katznelson are the graves of Samuel Yavne’eli and his wife. Yayne’eli visited Yemen in 1912 and returned to Israel with several hundred Yemenite immigrants. Many Yemenite families are also buried in the cemetery.
Location: At the junction of Highways 90 and 767. Turn west at the junction, drive up the hill, and take first right turn into the courtyard. For those arriving on foot, steps lead from the road up to the site. Phone: 06-751170.